Agung. Where do Gods live in Bali?

Bali Volcano Mount Agung, the heart of the island, is located in its eastern part. It is one of the active volcanoes of Indonesia and the highest point of Bali – Agung is 3142 meters above the sea level. 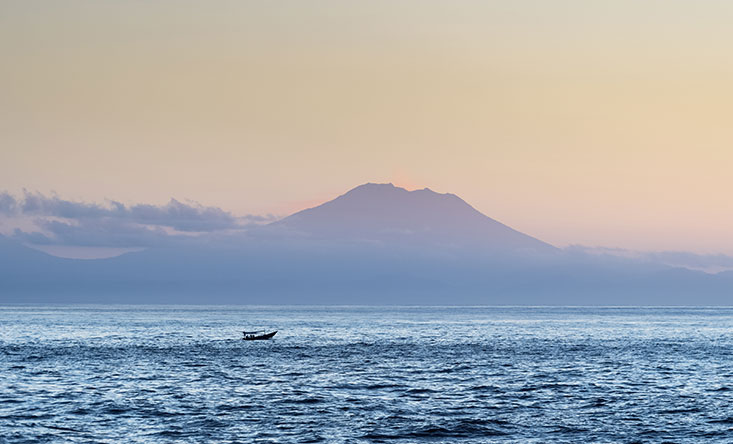 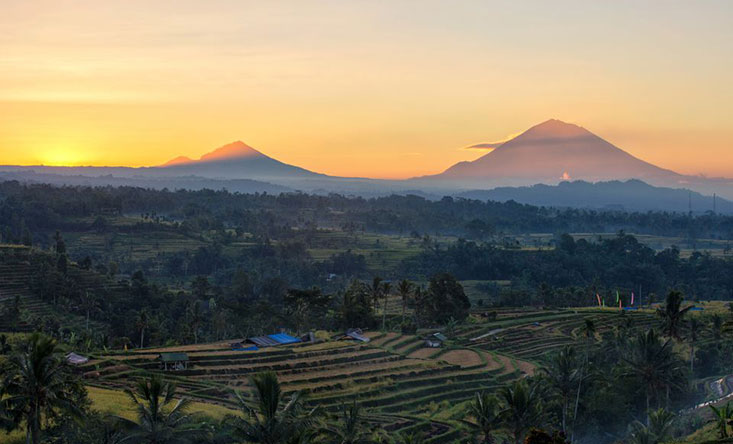 The legend says how Agung appeared. There was a time when Bali used to be a flat island, where happy people and animals lived. Once Gods have noticed this paradise and decided to settle there. As Gods couldn’t reside on the same level with humans, they built Mount Agung on the island, and on its top they built the Temple of Wisdom. It was made as replica of Mount Meru, the spiritual center of the Universe. Gods began to watch the life of Bali and its people from that point, and judge them strictly, but fairly. The bird Garuda took the most hard-working and sincere Balinese people to the top of the mountain, where they were allowed to live with Gods. Nowadays people of Bali continue to worship Gods of Mount Agung – they bring them food and small gifts every day. All local houses and temples are built with a focus on the volcano, and also many locals turn headwords of their beds to Agung's site.

The name of volcano translates as «the greatest mountain». Locals consider this place as sacred, thy believe that Agung protects the island from evil forces and spirits. The cone of the mountain is often surrounded with clouds. It can be seen from almost everywhere and it arouses amazement and mystic fear. Balinese people consider it as the symbol of Lord Shiva, the supreme being. In Hindu pantheon he creates and destroys the world in an endless circle of incarnation. That was proved by a real historic fact.

Balinese people have special ritual ceremonies every hundred years – they celebrate cleanup of the universe, called Eka Dasa Rudra. The next following ceremony was planned to hold in 1963 in Besakih Temple. The volcano started to rumble in February. Priests were the first to notice the unusual seismic activity. They figured out that Gods were given them a warning sign and spoke about that weird thing, asking to shift the celebration for the next year. But as special guests had already arrived on the island, president Sukarno insisted on the ceremony. The volcano erupted on March,18. Lava overflowed the most eastern part and villages. The gas cloud smothered Bali. Hundreds of houses were destroyed, many locals lost their homes, several thousands people died. This was one of the biggest eruption of the XX century! Its echo was still in 1964, and after that the volcano got quiet and fell asleep. The cleanup rituals were finished in Pura Besakih in 1979.

The catastrophe hasn't destroyed the belief of locals that Agung is a sacred mount. Today Balinese people put in front of their houses long bamboo poles during holidays and ceremonies on which they hang branches of fruits. Poles curve under these heavy gifts and take the shape of a mountain. This way Balinese people pay a tribute to Lord Shiva. 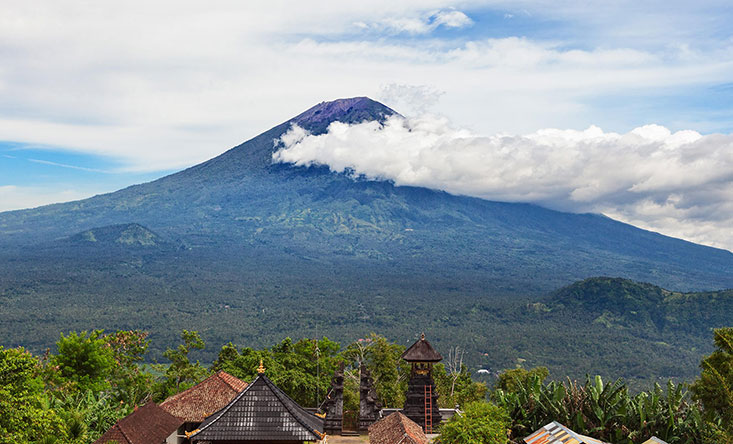 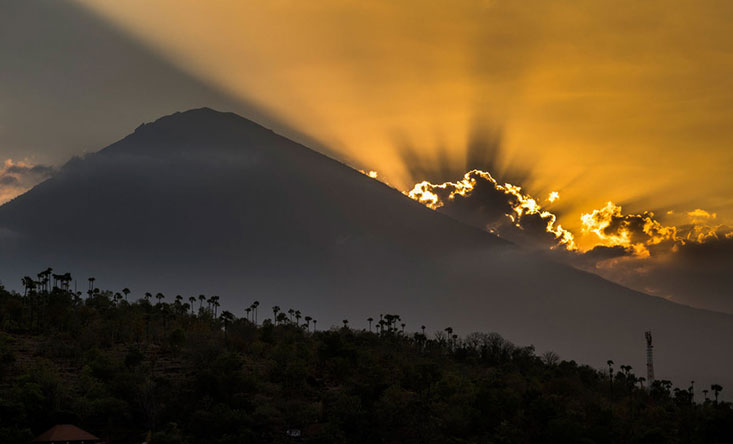 Bali volcano was sleeping for more than 50 years, but in 2017 it awoke again. The eruption started in November: the column of smoke rose on 700-meter height, and its tail in the south covered the surroundings with volcanic dust – flights to Bali were cancelled and the airport was closed for several days. Today the volcano has calmed down and the scientists removed an alarm, but still the trekking tours on Agung are forbidden.

Mount Agung has an effect on the climate, the tides of air move from the west to the east and meets with the huge mountain. That’s why in the west it rains a lot, the temperature is higher and there are a lot of tropical plants, and in the east the climate is milder and woods looks like the midland. It’s cold on the top of the volcano – you can even get frozen there.

Pilgrims and tourists have always aimed to win the volcano top – to meet the sunrise on the greatest mountain. There are different tracks. The longest one takes two days, the shortest takes from 4 to 6 hours. This is real challenge, but the most beautiful sunrise of your entire life is worth it! 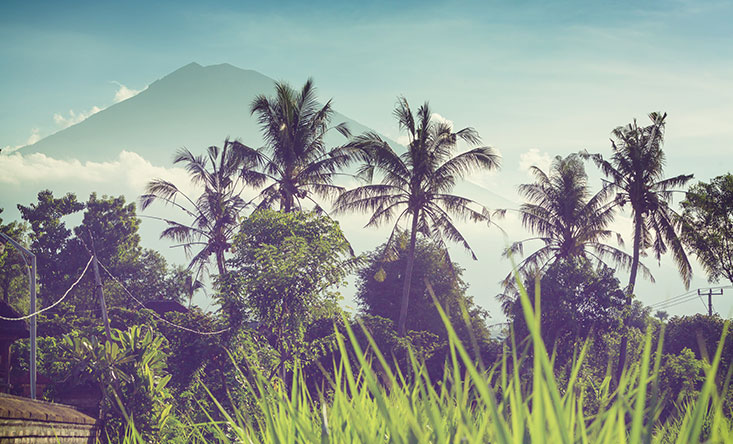 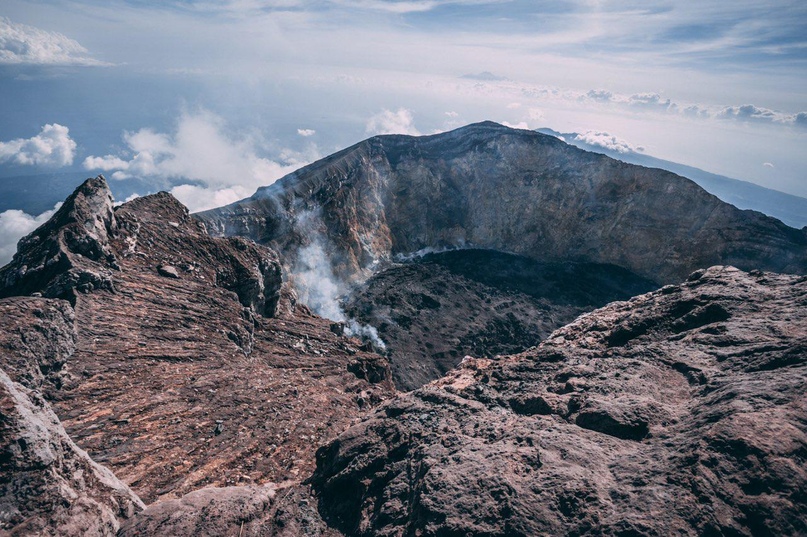 The trip to Agung is an amazing adventure. The road goes along wild beaches with black volcanic sand, Goa Lavah cave where the entrance to the parallel universe is hidden, endless rice fields, and curved paths in the woods. Mother Temple Pura Besakih is located downstairs. The terraces of this complex go up the volcano. Multilevel structure of these buildings and temples is called  «meru» in Bali, in honor of sacred mountain from which Agung originated.

You should go to Agung Volcano to feel the magic of Bali. Trekking on Agung is forbidden today, but even at the foot of Agung you will be astonished with its incredible power. Try to look beyond the skies, where Gods live.