Do you want to know, why Bali is called «an island of 1000 temples»? Then get closer with its most important sacred places. For many years despite the difficulties, earthquakes, and wars, these historic and architectural sites defended the island from the evil spirits. The temples of Bali maintain local traditions and culture, and remain the symbols of this tropical island. We made for you a list of top-12 Bali temples. Don't waste your time and go to experience new adventures!

This temple is located on the top of the cliff Tanah Lot, and its name means «ground on the water». Pilgrims have been coming here since XVI century. There was a time when people believed, that inside the temple lived a big venomous snake that protects Tanah Lot from evil spirits and unwilling guests. Today the temple is open for everyone. Come at the sunset and see, how the evening sunbeams change the whole look of this place and take beautiful pictures! 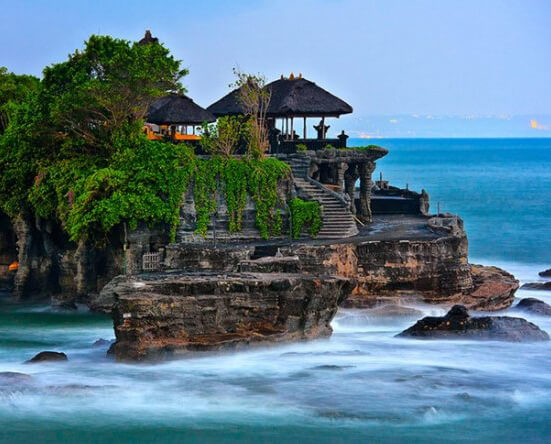 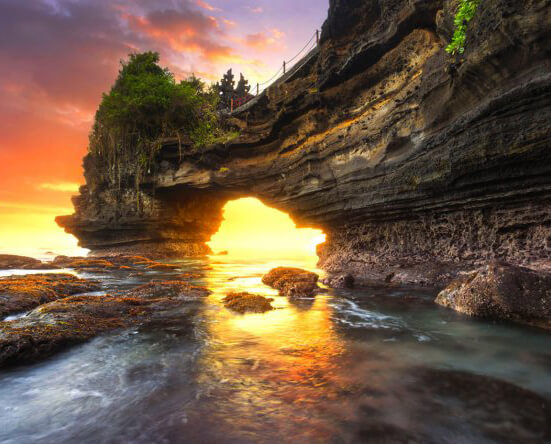 This nature reserve is located in the town Ubud in central Bali. More than 115 species of trees grow here, including rare ones. Here also lives a huge population of monkeys. There is a complex of three Hindu temples, Pura Dalem Agung Padangtegal, Pura Beji, and Pura Prajapati, located on the territory. Pilgrims come here to worship God Hyang Widhi – every month around ten thousands tourists visit this place. Recharge yourself with its energy and explore the antiquities hidden in these mysterious woods. 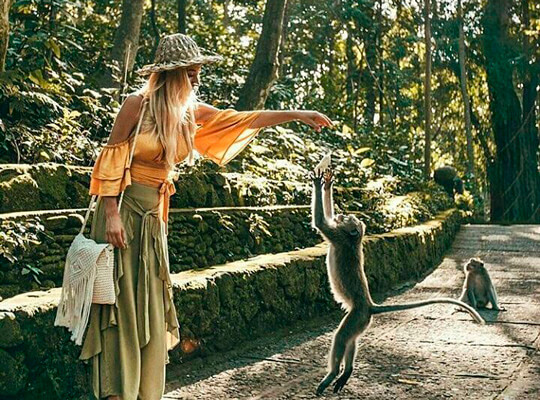 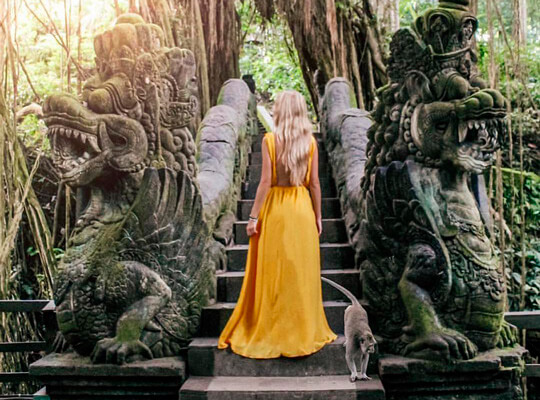 This one of the Bali sea temples is located on the coastline on the top of 70-meter cliff. It was built in XI century to commemorate Hyang Widhi Wasa. According to the legend monkeys that live on the territory of the temple, are defending it from evil. There are two ways leading to the temple. Downstairs is one of the best surf-spots in Bali. This is a prefect place for meditation. Visit it on the sunset and feel the power of the wind and Indian Ocean! 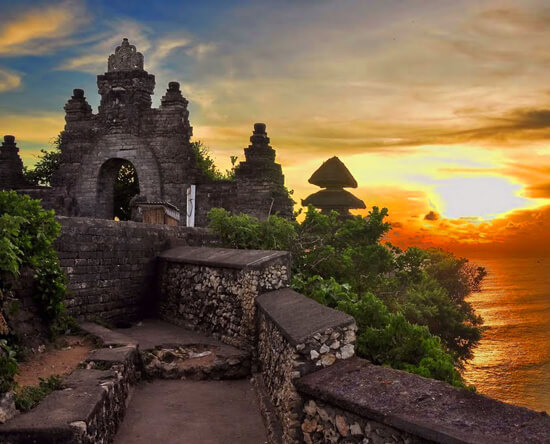 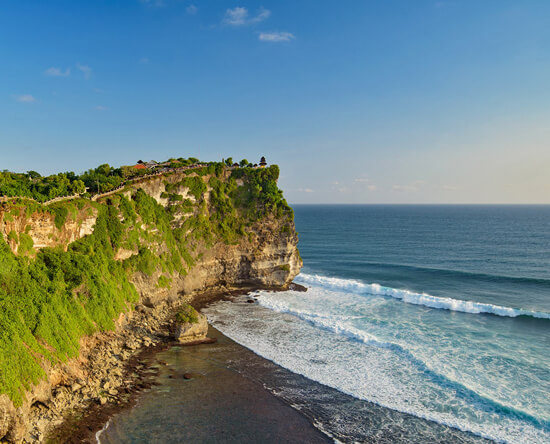 Tour "The mystical Uluwatu temple and the Kecak fire dance".

This Bali water temple is located on the shores of Lake Bratan, which is 1200 meters above the sea level. It was built in 1633 and named after this lake, the main irrigation source of the island. The most important relic of the followers of Shiva is placed here – this is 11-stepped tower dedicated to Lord Shiva and Goddess Parvati. The temple is encircled by majestic mountains. Locals and tourists love this picturesque circle very much, here they ride away from civilization. 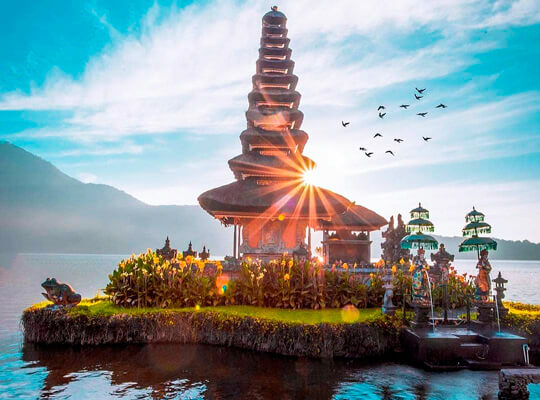 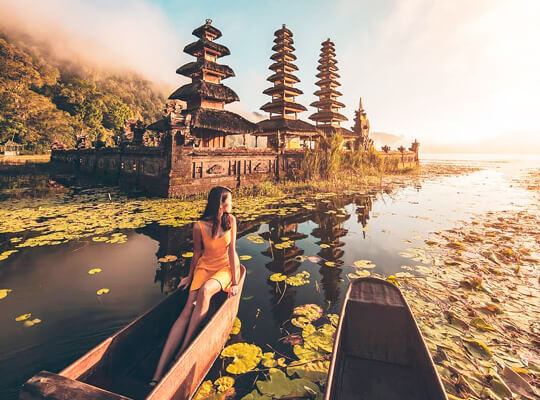 Another Hindu water temple is located in Manukaya village. It appeared in 962 and is considered to be the most ancient temple in this area. This is a complex of mineral water springs that locals considered as Holy. Balinese Hindu believes that this water washes away all bad things and helps to start life with clean state. You can also visit presidential palace of Istana Tampaksiring, which is located nearby. 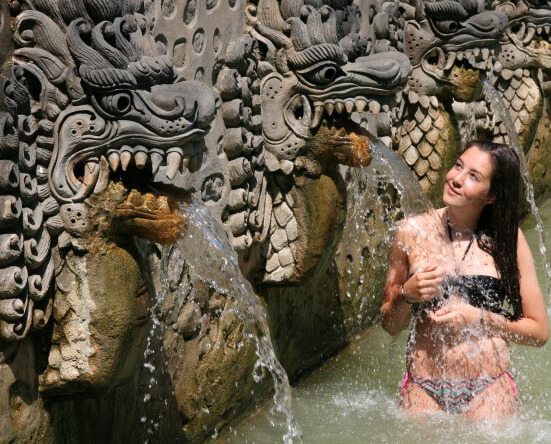 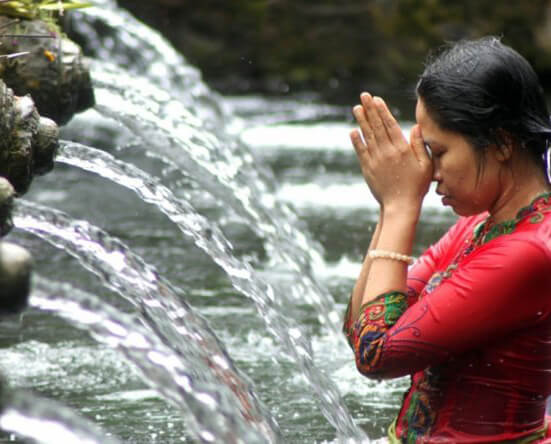 This complex of 23 temples is located on the southwestern slopes of Mount Agung. «Mother Temple» is considered to be the main island's relic. It is encircled with beautiful mountains, rice fields, and streams. Pura Besakih is located on 6 levels. The best time to visit it is springtime. During the whole year more than 70 festivals are celebrated here. Try to catch one and get to the closed area! 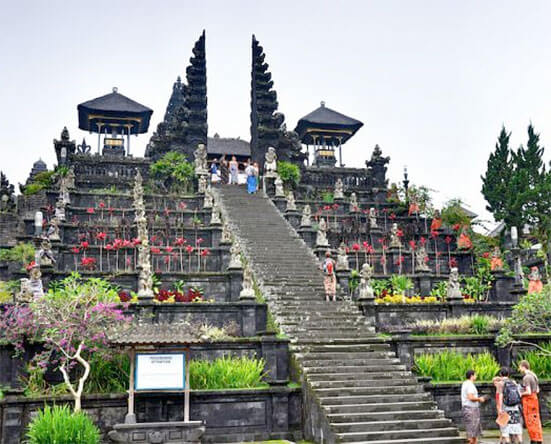 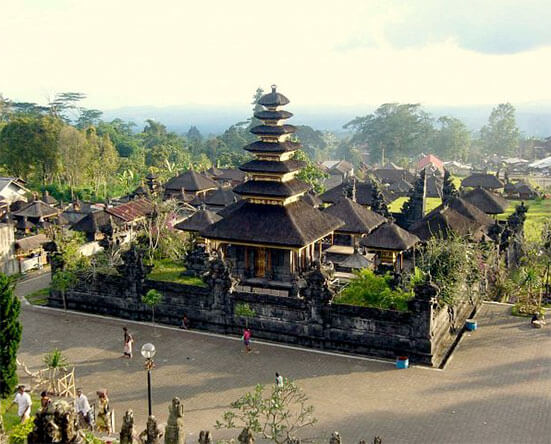 This ancient site appeared in XI century. The name of the place means the «elephant cave». It is located in central Bali, not far from Ubud. At the entrance there is a huge wall carved with mythology creatures on it. Inside the cave there is a Buddhist temple, divided into zones for meditation and bathing. Here takes place mysterious ceremonies and worship to Lord Shiva. Come and get the special vibes of this place that will fill you with calm and happiness. 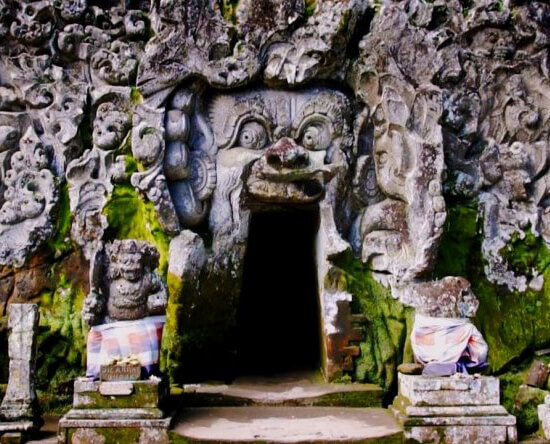 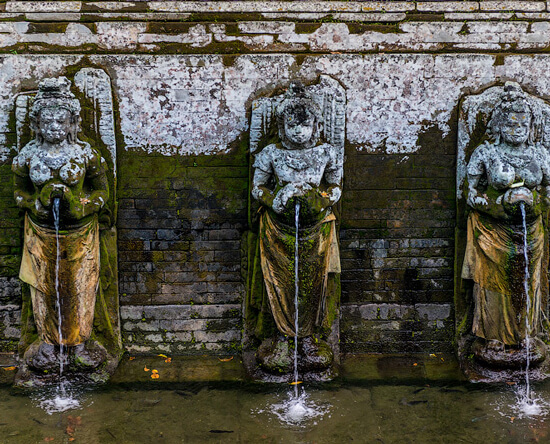 This «beautiful garden» is located in the south of Bali. The temple got its name because it sinks in green. There are also several ponds with lotus flowers on the territory of the temple. It was built in 1634 at the behest of rajah, the head of Mengewi kingdom. Some architectural ideas were taken from Chinese tradition. A few times the temple was damaged with powerful earthquakes, but then it was renewed. The temple got its present look with country yards and enclosures in 1937. Come to see many of its beautiful high towers and wonderful landscape revealing to the viewer. Pura Taman Ayun is a part of the list of UNESCO World heritage sites. 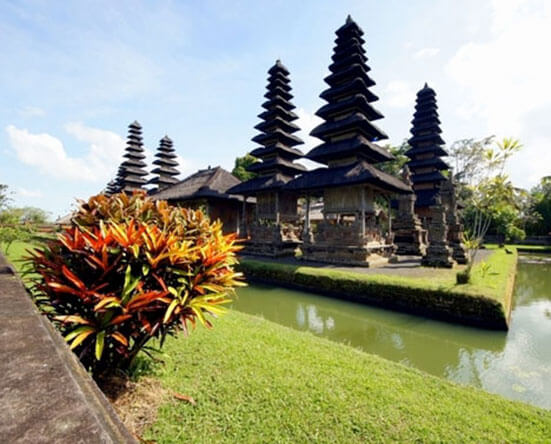 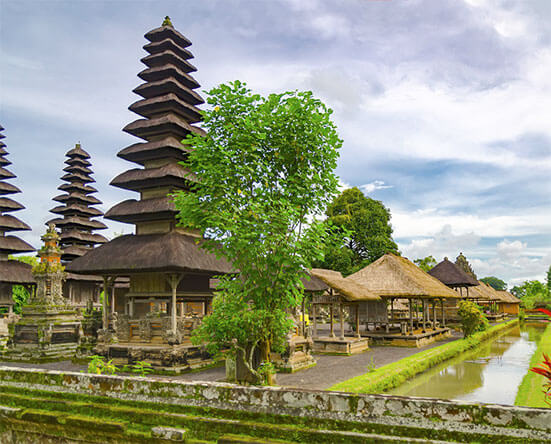 This cave temple is located in the north, in the valley of the Pakerisan River. The way to this site goes through beautiful rice fields. This is a complex of 10 shrines cut in cliffs on the east and west shores of the river. According to the legend the King Anak Wungsu built this temple in XI century to commemorate his father, the great ruler of Udayana dynasty. Go around and try to find what is hidden in these rocks. Mark the inscription of «Haji Lumahing Jalu» meaning «the king made a temple here», it can help you to find the answer. This place provides meditative state of mind and makes you feel inner harmony. 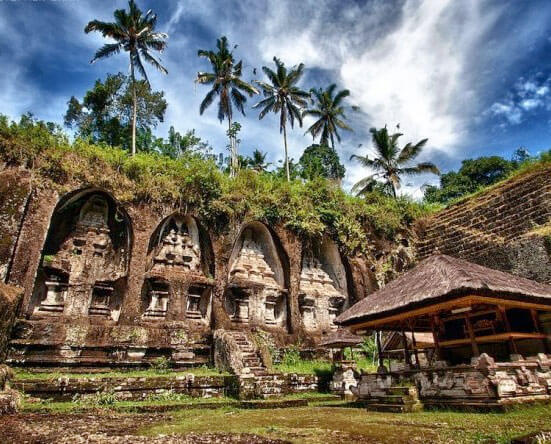 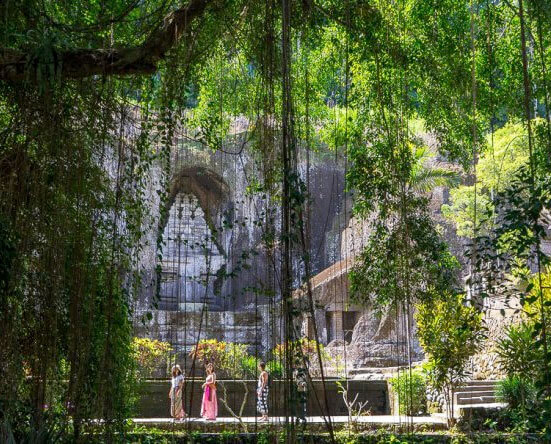 This temple is important things in Bali. It is dedicated to Dewi Danau, the Goddess of lakes and rivers, and its name is translated as «the head of the lake». Initially the temple was situated at the foot of Batur Volcano, but in 1926 the powerful earthquake destroyed a huge part of it. Just the 11-stepped’ tower stood, and was relocated to the present place. The whole complex includes 9 temples, 285 shrines and pavilions. Visit the place at the full moon and feel the mystic energies of the island of Gods. 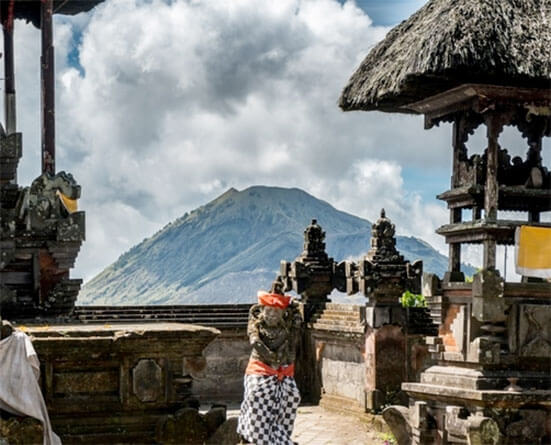 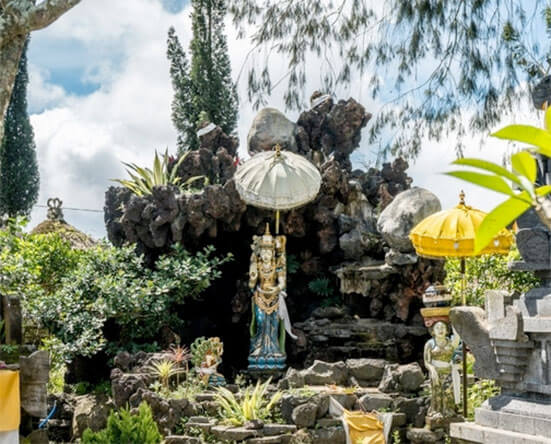 This is on of the 9 temples built in XI century to protect Bali from the evil forces. It is located on the southern slopes of Mount Batukaru. In 1604 the complex was almost destroyed in the war, and it was rebuilt just in 1959. For Hindus this temple is one of the most important relics. The main part of it is hidden from the eyes of the visitors, and you can see it only during the special ceremonies. When you are at the territory of the temple, pay attention to the central part of the building – the 7-stepped tower dedicated to Mahadeva, the God of Mount Batukaru. There is a special pilgrimage that takes place once in a year, when you can walk on the top and worship gods. 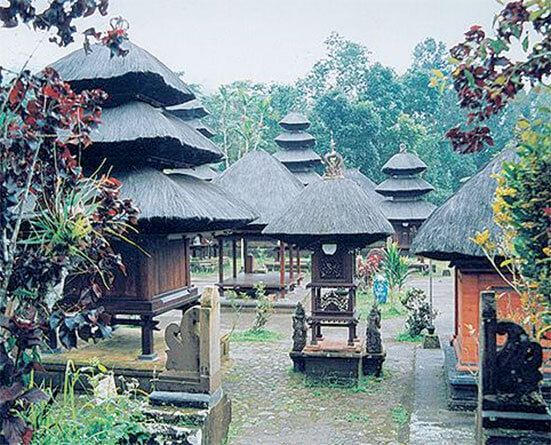 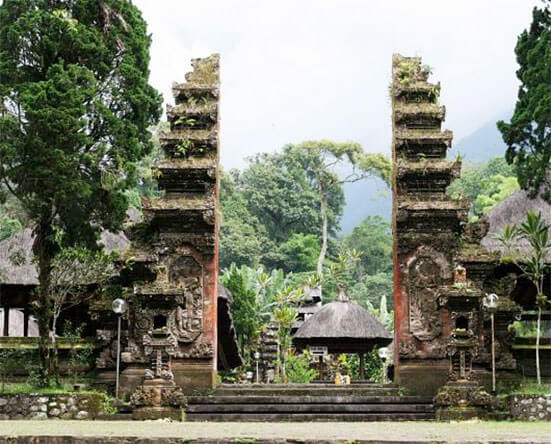 Another Balinese water temple is located in the middle of Ubud. Saraswati Temple captivates the visitors from the first sight. It is decorated in rich oriental style and there is wonderful tropical garden around the temple. There is also a pond with blooming lotus. Go over a tiny bridge, and your body will fill with calmness and all your worries will pass away. 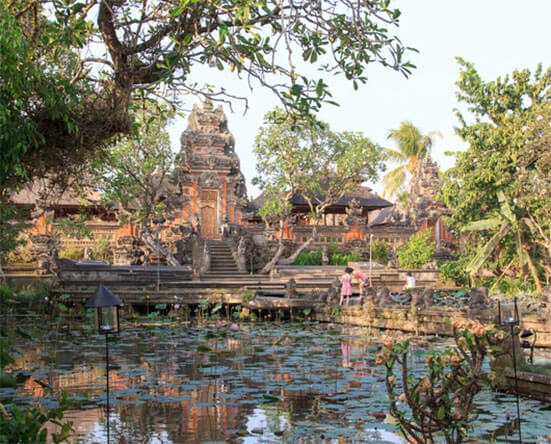 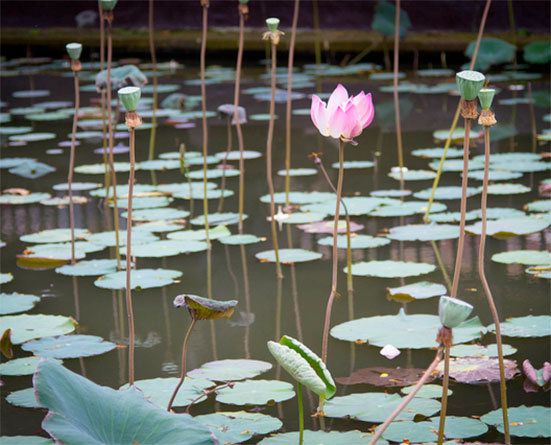 Each temple from this list is a unique site. Travel around Bali now, explore the island and its brilliant ancient sites!