You will be astonished with beauty and diversity of Bali’s nature. Take  a walk through the parks in Bali and explore the flora and fauna of Southeast Asia. You will see rare animals and birds in the natural environment, feel the energy of these places and discover how plants and wildlife differ in all parts of the island. Bright and unusual tropical flowers bloom in the south; perennial coniferous trees grow in the north, and deciduous woods are in the east. There are not only monkeys, bats and snakes which live in the jungle, but also deer, Bengali cats, palm bushes. Endangered animal species are saved in the local nature reserves.

We have prepared a complete guide to the parks of Bali, which can help you to plan where to go and what to see. 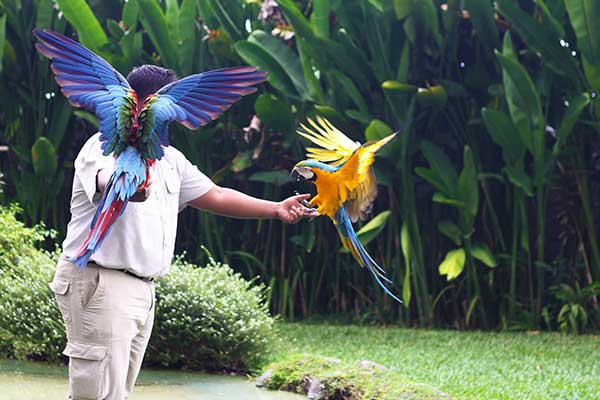 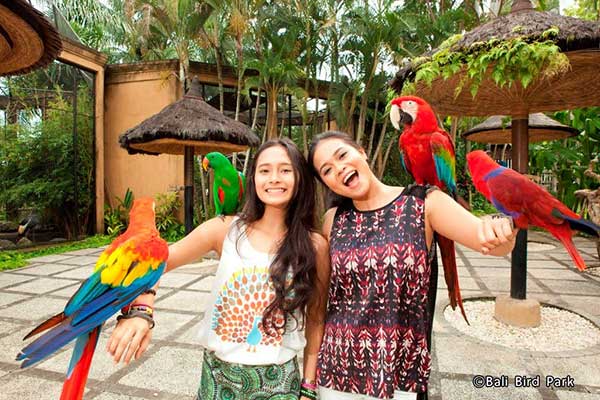 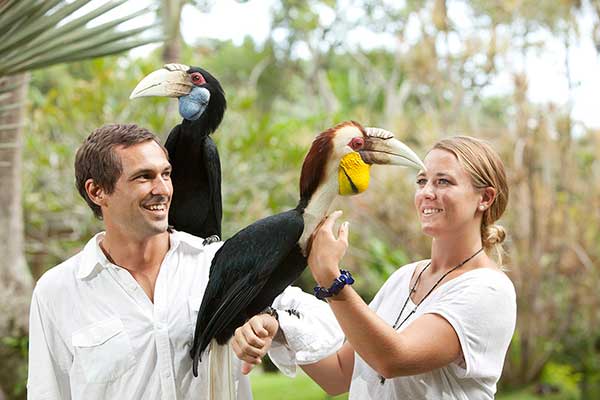 A unique collection of birds and reptiles is located 13 kilometers from the city of Denpasar, the capital of Bali.

Birds from the island of Bali, as well as from South America and Africa, Sumatra and Borneo, Papua New Guinea and Java are gathered here. The territory of the park is divided into seven parts, each of them representing the environment of all these regions. You will be surprised with the unusual colors of the South American red ibis, the orange Amazon from the forests of Venezuela and the African purple turaco; observe the predatory Kaffir raven and the frightening coucal; and of course, admire the red-crowned cranes, beautifully magnificent birds that seem to have appeared from the illustrations to the collection of oriental fairy tales.

You will also see crocodiles, turtles, snakes, Komodo dragons and iguanas. The most fearless can see a crocodile having a live chicken for lunch. On the territory of the park there is also a large ornithological research center.

The tour to Bali Bird and Reptile Park will be an enlightening entertainment for children and their parents. 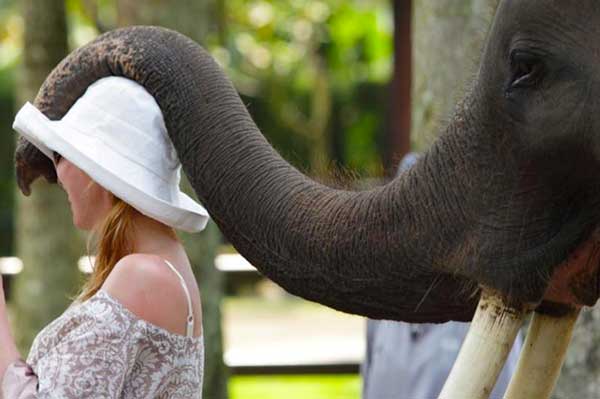 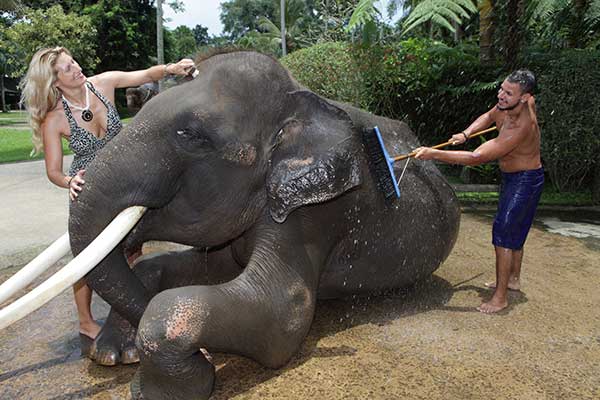 You can watch daily life of the biggest and most intelligent animals in Bali Elephant Park.

It is located in the center of the island, 18 kilometers from Ubud. Sumatran elephants live in a specially built territory in the tropical forest. You will see grown-up elephants and their babies walking, eating, relaxing and taking baths, and you can also feed one of the giants or scrub its back with a brush when he’s taking a bath.

You can learn interesting facts about the history of the park and its inhabitants, Sumatran elephants, which are remaining not many today in the wild nature. They are recognized as endangered species. A couple from Australia opened this park in 1997; they decided to save elephants from the island of Sumatra, which became extinct because of active deforestation, poaching and conflicts with farmers. Nine elephants were first relocated in Bali, the other eight in the next year; year after year the number of animals has increased to 30. 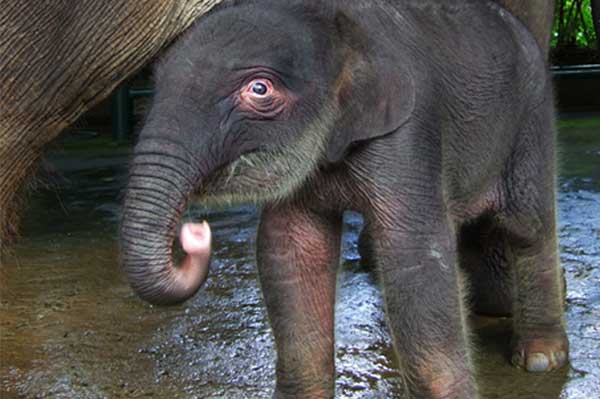 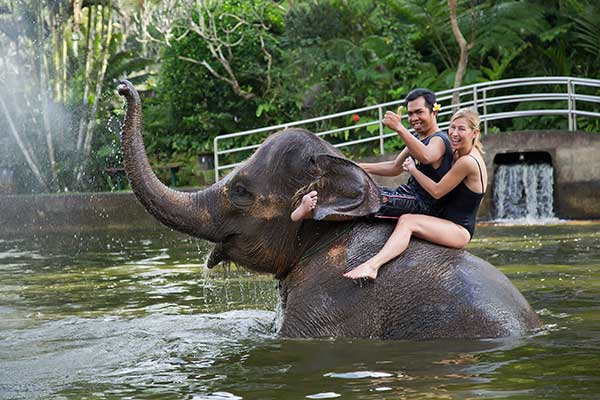 There are perfect conditions for the elephants in the park. The stuff love animals and take care of them; the atmosphere is kind and positive. There is a museum and a gallery, a souvenir shop and a restaurant on the territory. If you want to buy a nice souvenir or a painting drawn by an elephant, they are always available.

View a trip to the Elephant Park on our website - https://mybalitrips.com/en/elephants-park/ 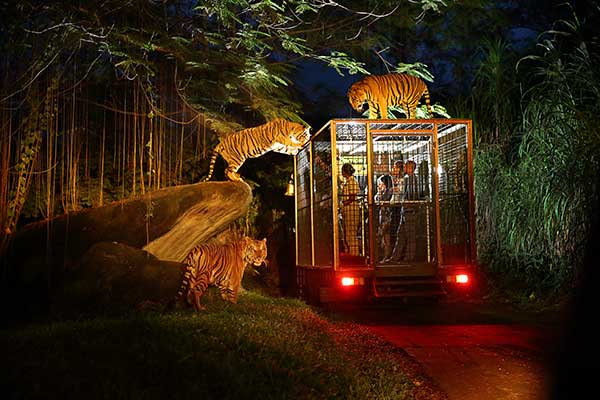 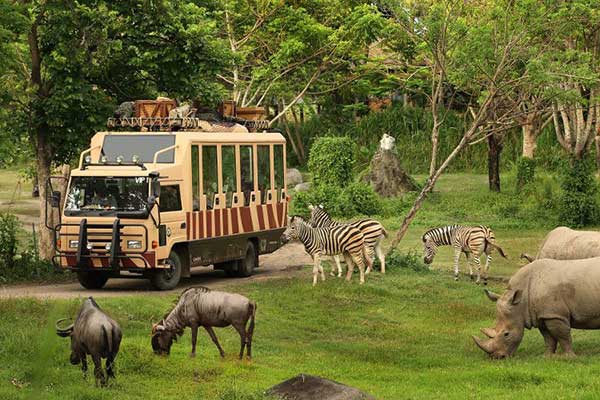 One of the biggest parks in Indonesia, which represents many wild animals and birds, Bali Safari and Marine Park, is in the east of the island.

The area of 40 hectares houses 100 species of animals from India, Africa and different parts of Indonesia. The territory is divided into several sectors: the bird area; the sector of leopards and cheetahs; the zones of tigers, herbivores, and reptiles; the elephant village, and aquariums. Hippopotamus and rhinos, Australian kangaroos and antelopes, long-necked giraffes and barking deer live in spacious enclosures; conditions are close to their natural habitat.

Special buses and jeeps protected with trellis take tourists throughout the park. In one-hour trip you can see most of the local inhabitants, if you are lucky, some of them in a close distance. Tigers and lions sometimes jump on the roofs of jeeps and "listen" to the guide. 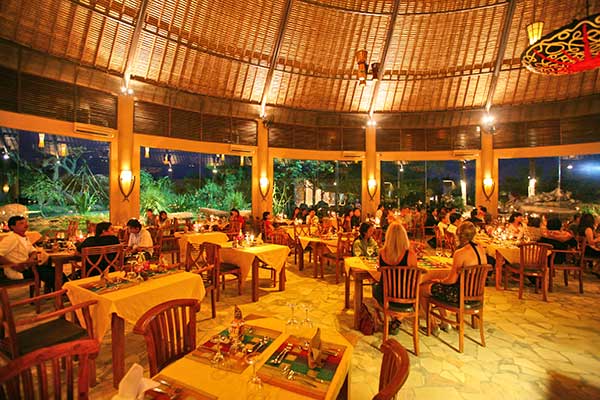 After watching the wildlife you can relax and enjoy the activities in the Waterpark, see the elephant show, explore a traditional Balinese village and dine in the restaurant with a spectacular panoramic view of the jungle.

Bali National Park is on the west coast of the island. It’s situated on the land and the sea area.

More than 200 species of rare animals and birds live in the area of 190 square kilometers. Some of them you can only see there today. European researchers founded the park at the beginning of the last century. It was growing and eventually became a national reserve in 1950s. Several endangered species, including the Balinese starling, the symbol of the island, were saved here.

On the territory of the park there are mountains and plains, tropical woods and savannas; along the coastline there are mystical mangroves, and the amazing underwater world with the variety of coral gardens, reefs and marine inhabitants. 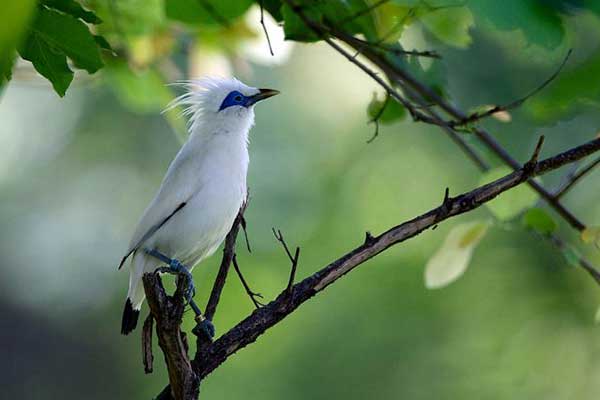 You can explore the park by walking along one of the routes here; observe it along with the neighboring small islands on a sea walk; or surf and dive – you will have an unforgettable experience. 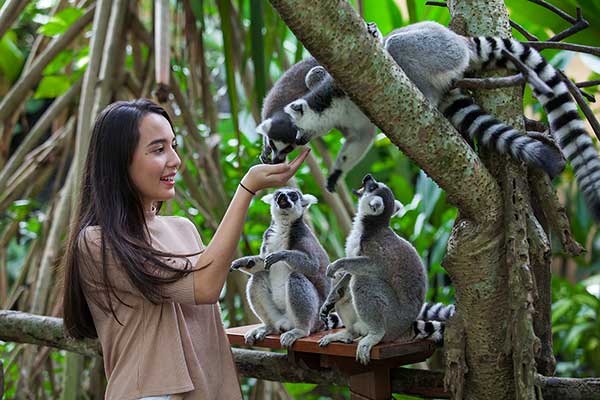 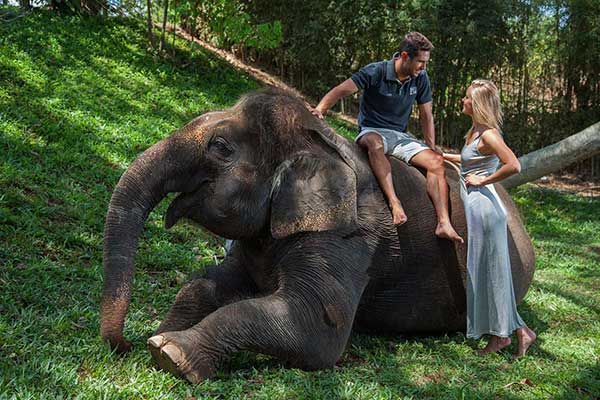 Those who don’t have much time can go to Bali Zoo. It’s near Ubud.

This private zoo appeared more than twenty years ago; over the past years the territory has grown, the owners have made a lot to make it beautiful and comfortable.

Nice paths go between the pavilions; navigation is convenient and easy. African lions and crocodiles, Kalimantan orangutans and Malay bears, deer and endangered Sumatran tigers, the smallest on the planet, live in spacious enclosures; there are also many birds and reptiles. You can watch for hours how elephants take baths in a large pool with a waterfall. 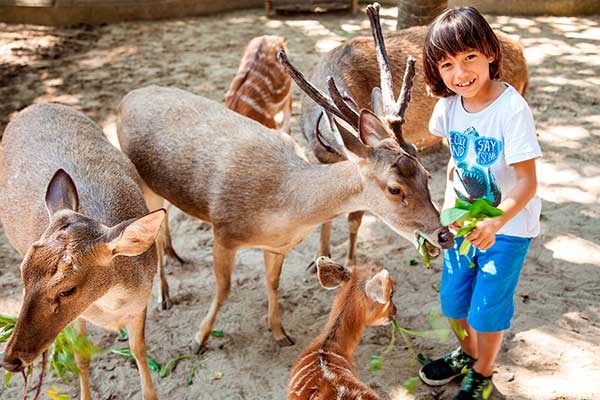 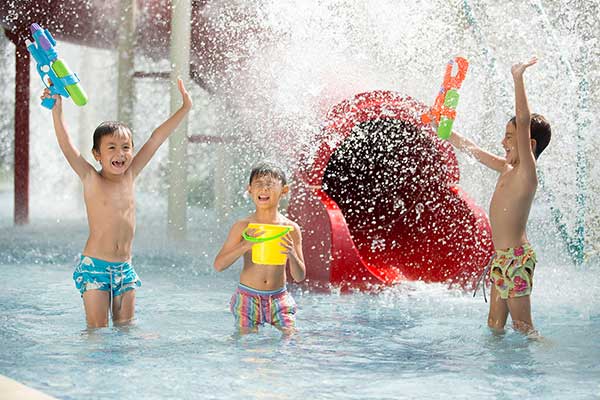 Children will enjoy not only meeting with animals, but also water slides and vines attractions in the swimming pool. You can also see amazing animals’ show that takes place several times every day. 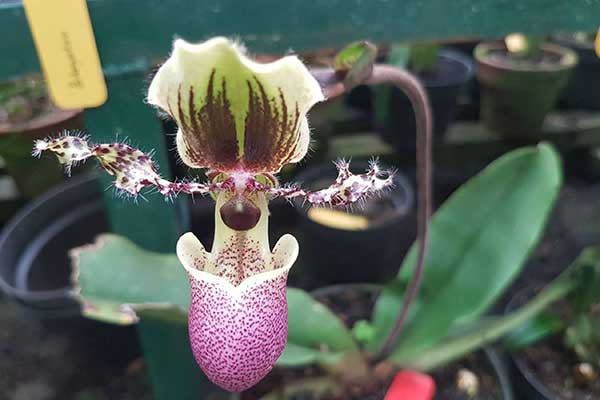 To be finally filled with peace, enjoy the vibrant green colors of the island you should go to central Bali, the Bedugul district, where Indonesia's biggest Botanical Garden is located. The temperature here is lower than on the coastline; the park spreads in the middle of the mountains so you can walk in a relaxed way along well-groomed alleys, enjoying beauty and coolness. In the garden you can see a large collection of orchids and rare species of tropical plants.

Parks in Bali will open you a wonderful world of living creatures and wildlife. Meet the island's inhabitants, explore its sacred areas and discover new amazing things!