A journey into the history of Borobudur Temple

If you dream of visiting an ancient Buddhist sacred place, go to Borobudur Temple in Indonesia, also called «stone lotus». Historians believe it appeared in the IX century. It used to be a centre of Buddhist pilgrimage, but eventually its popularity fell into oblivion for centuries. It was rediscovered again only in the XIX century. Today Borobudur Temple is one the most visited places by tourists and Buddhist pilgrims. From the above it looks like mandala, the Buddhist model of the universe. Come and see it firsthand. Walk through all its levels; see its fine bas-reliefs and mystical statues of Buddha, hidden inside the carved stone stupas.

Hindu complex Prambanan appeared in Indonesia together with Borobudur Temple. Beautiful, mysterious Temple of Lord Shiva is open for visitors. Temples of Lords Vishnu and Brahma are located nearby. There are also three temples in honor of sacred animals of these gods.

You can also visit Kraton Palace to see how kings of Java Island used to live in the XIX century. Some of its buildings were partly destroyed during wars with Holland and earthquakes. A small part of the complex has been restored nowadays; it's already enough to see how beautiful was the original palace with its numerous pavilions and channels.

Go on tour to see famous temples and palaces in Java Island and get closer with the heritage of those ancient times. Touch these unique shrines and learn about their legends and mysteries. 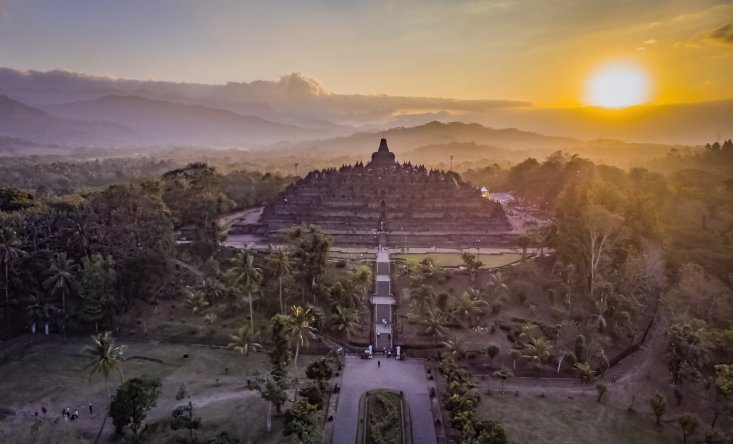 borobudur-tour
5.0 2
131 171 USD 2
* The discount could be applied for organized groups only from one address for pick up and drop off.
SHOW MORE

Chosen:Tour to Borobudur temple for 1 person

English-speaking guide meets you at Jakarta airport early morning and you will go to the temple complex Prambanan. You will learn about its history, walk around the territory, visit temples, including Lord Shiva Temple where you can see many bar-reliefs with depictions of gods and animals, and also see how Javanese people lived in IX century.

Then you visit the Royal Palace Kraton. This is a big complex with a mosque, squares, streets, small shops, music and dance pavilion, arms shop, stables and a royal museum on the territory. You can take photos of the richly decorated front entrance gates and ancient stage, go inside the palace and walk across small streets and shops.

Then you go to Borobudur Temple. You will have lunch in one of the local restaurants and after that have an excursion to an ancient temple. You will walk around its levels and see the unique architecture. Bar-reliefs on the walls tell the story of Buddhism. There are 72 small bell-shaped stupas and a big central one on the top level. There are rhombus halls in all stupas through which you can see statues of Buddha hidden inside. According to the legend, if you touch fingers of the statues, you will obtain happiness and success. Enjoy the view of the nature landscape around, and take beautiful photos of the temple with tropical woods and mountains at the background.

When the excursion to the temple is finished, the transfer takes you to the hotel or back to the airport.

Start a Live Chat with us: